The tradition of diamond engagement ring 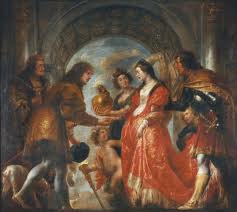 1477 : Archduke Maximilian of Austria gave a diamond ring to Mary of Burgundy

Until the 15th century only kings wore diamonds as a symbol of strength, courage and invincibility. Over the centuries, however, the diamond acquired its unique status as the ultimate gift of love. Indeed, it was said that Cupid's arrows were tipped with diamonds which have a magic that nothing else can ever quite equal. Since the very beginning, diamonds have always been associated with romance and legend. The very word "diamond" comes from the Greek "Adamas" meaning unconquerable, suggesting the eternity of love. The Greeks also believed the fire in the diamond reflected the constant flame of love.

But it wasn't until 1477, when Archduke Maximilian of Austria gave a diamond ring to Mary of Burgundy, that the tradition of diamond engagement rings began. Even the reason a woman wears it on the fourth finger of her left hand dates back to the early Egyptian belief that the vena amoris (vein of love) ran directly from the heart to the top of the third finger, left hand.